I’m reading “Zero History” by William Gibson.  It is the last book of a trilogy that pretty much predicted YouTube and applications like Layar before there was any reasonable way for either to exist. And, yes, he gave us the term “cyberspace” in 1982.

This book is nominally about marketing…or maybe not, it’s hard to tell.  It was a little unsettling when he had the protagonist (Or maybe she’s not. Again, hard to tell.) stay in the same random Paris hotel where my wife and I mistakenly spent the first night of our honeymoon.  It was more unsettling when I read this:

“…she wondered exactly when coffee had gone walkabout in France.  When she’d first been here, drinking coffee hadn’t been a pedestrian activity.  One either sat to do it, in cafes or restaurants, or stood, at bars or on railway platforms, and drank from sturdy vessels, china or glass, themselves made in France.  Had Starbucks brought the takeaway cup? she wondered. She doubted it.  They hadn’t really had the time.  More likely McDonald’s.”

I love the term “gone walkabout.”  No offence to my fellow NPD bloggers but that little snippet is likely the best writing you’ll come across in this or any NPD blog.

For the past couple of years, I’ve included my own little riff on this in presentations I’ve done at conferences.

In 1997, when I was meeting with folks from our various European offices to brief them on CREST foodservice industry research and how we use it to help the industry make decisions, an Italian guy in the audience raised his hand and said “that chart is wrong”.  We were looking at a chart that showed how consumers in the US consumed coffee.  It showed the dayparts.  It showed the restaurant channels.  It also showed where consumers actually drank their coffee.  That part of the chart showed that about 40% (maybe more, I don’t remember exactly now) was consumed off-premises…on the go.

My colleague said that this couldn’t be correct.  ”Coffee is not for carrying!  Coffee is to be ordered from a bar and consumed at the bar or at a table, with someone.”  We discussed the issues and concluded that the chart was correct and that Americans were ridiculous, which I’ve found is a satisfactory conclusion to conversations for most people in the world.

Further to this conversation, I heard a presentation by a woman named Vanessa Kullman, the founder of Balzac Coffee in Hamburg.  She told the story of how, interviewing people walking by the front door of what was to be her first shop, they universally rejected the idea of buying coffee in a paper cup and taking it away.  She had to buy the cups and tops in the US and warehouse them in Germany because there was no European source.  At the time of her presentation she had over 50 shops.  Gutsy.

But:  in 2000, as the chart below shows, nobody bought coffee to go in the countries we track.  Today, a huge chunk of Northern European consumers buy coffee to go.  Coffee hasn’t just “gone walkabout” in France. It’s everywhere.  And, it’s not just a global brand that did it, Vanessa Kullman and other gutsy business people did it all over the place. 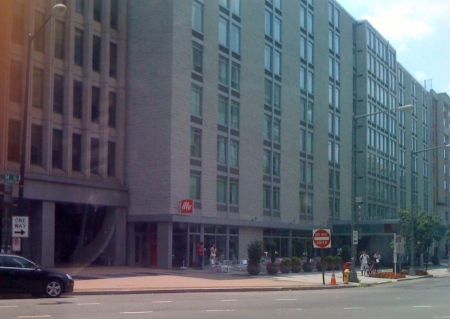 Caffe is the name of the coffee concept boutique coffee shop located within the Marriott Renaissance Hotel in the West End of NW Washington, D.C.  This was the first of several shops opened in the last three years that exclusively sell Illy coffee and their designer products (namely their fancy hand painted espresso cups/plates and pods). Although not my first choice for espresso in most cases, every time I’ve had a cup of Illy at this M Street location, I have been thoroughly pleased. The dark, complex and caramel-like finish of the typical Illy espresso is a proven winner.  The true to form syrupy crema that commonly accompanies a well made Italian espresso consistently shines through here and, based on third-hand accounts, their cappuccinos are also well-made.

This is definitely not a place to sit down and work, eat a meal or chat for too long with friends.  Keeping in the typical Italian espresso bar tradition, there is only a standing counter along the windows of this petite shop where one is able to down their drink and continue on.  Not too linger friendly here.  Not to worry, just a quick walk through the into the adjoined restaurant (also part of the Marriott Renaissance Hotel) and you can begin an entirely separate dining experience.

In short, although this is not a place for much more than a quick coffee on the go – it is a quality coffee drinking experience and is worth a stop if you’re in the area and desire a quality made coffee drink.  The iced latte I had here in Summer 2010 was probably the best I’ve ever had.  Try getting a simlilar experience across the street at Starbucks — simply unheard of.

I like the cup (seen above) so much that I asked to purchase it.  I was pleased to find out that they happily sell the cup/plate/spoon sets used for a little under $10.

Here are some additional links that discuss the place:

Caffe del Doge in Palo Alto is a franchise of an Italy-based company but owned by a group of local shareholders. It is a fine cafe located on University Ave near Stanford University and within a walking distance from the Palo Alto CalTrain station. I have frequented this cafe for several times and finally had a chance to write about it.

I visited Caffe del Doge earlier this week. It was in the late morning during the summer time so the cafe was not as crowded as it usually was during the school year. The place seems to be a meeting place for local business people as well as a study place for Stanford students. The cafe has a high ceiling with an upstair loft providing extra seating. The interior decoration is in bold yellow and presents various pictures of beautiful Italy in general and Venice in particular. There are a couple of outdoor tables and indoor high bar stools overlooking outside if you would like to enjoy people watching. But free wireless internet and electrical plugs are also available if you prefer working on your laptop instead.

Ironically, my most favorite drink at Doge is not coffee. Most of the time I ordered their thick and dense “drinking hot chocolate” (which got quite a lot of hostile reviews in yelp!). It turns out that there are not so many places that you can have this kind of hot chocolate so I tried to take the advantage of this offer when I visited Doge. The pastry is also delicious.  But your total bill can add up quickly as the price of food and drink sold in this cafe is on a relatively high range. But remember that the cafe is located in Palo Alto and the ingredients they use are of high quality so we should not complain here. The cafe also sells selections of roasted coffee beans (both blends and single origins from the America and East Africa) and chocolate bars.

Since I was on cafe hounding mission, I decided to order a cappuccino instead of the usual favorite hot chocolate. As always, the staff was very attentive and carefully prepared for my drink. They used their own classic blend “Doge Nero” for my cappuccino. According to their description of the blend, Nero was introduced in 1996 and became the best selling blend in Doge’s Venice cafe. For me, the blend was not too strong (both in terms of body and aroma) but seemed to work quite well with the foam in my cappuccino due to its dark chocolate aftertaste. Given the tradition and trend in specialty coffee that promote 100% Arabica blends, I was surprised to learn that Nero was in fact a blend of Central and South American Arabica and also ROBUSTA from Karnataka region of India!

Overall, what is lacked at Palo Alto Caffe del Doge is the good smell of roasted coffee beans that you usually expect to get when you visit a cafe that roasts their own beans on premise. This is because Palo Alto Doge does not roast their beans at the cafe. In fact, the beans were roasted and shipped to the cafe directly from the roasting facility in Italy. If you are a cafe geek looking for coffee aroma upon stepping inside the store or someone who is very obsessed with very freshly roasted beans, then you will have to knock some points out of Palo Alto Caffe del Doge. But overall, the cafe is a very fine place to have coffee in Palo Alto. Will I revisit there again? YES, of course.